BYD announced it delivered its 100th battery-electric truck in the United States. Globally, BYD has delivered more than 12,000 zero-emission electric trucks across all classes. 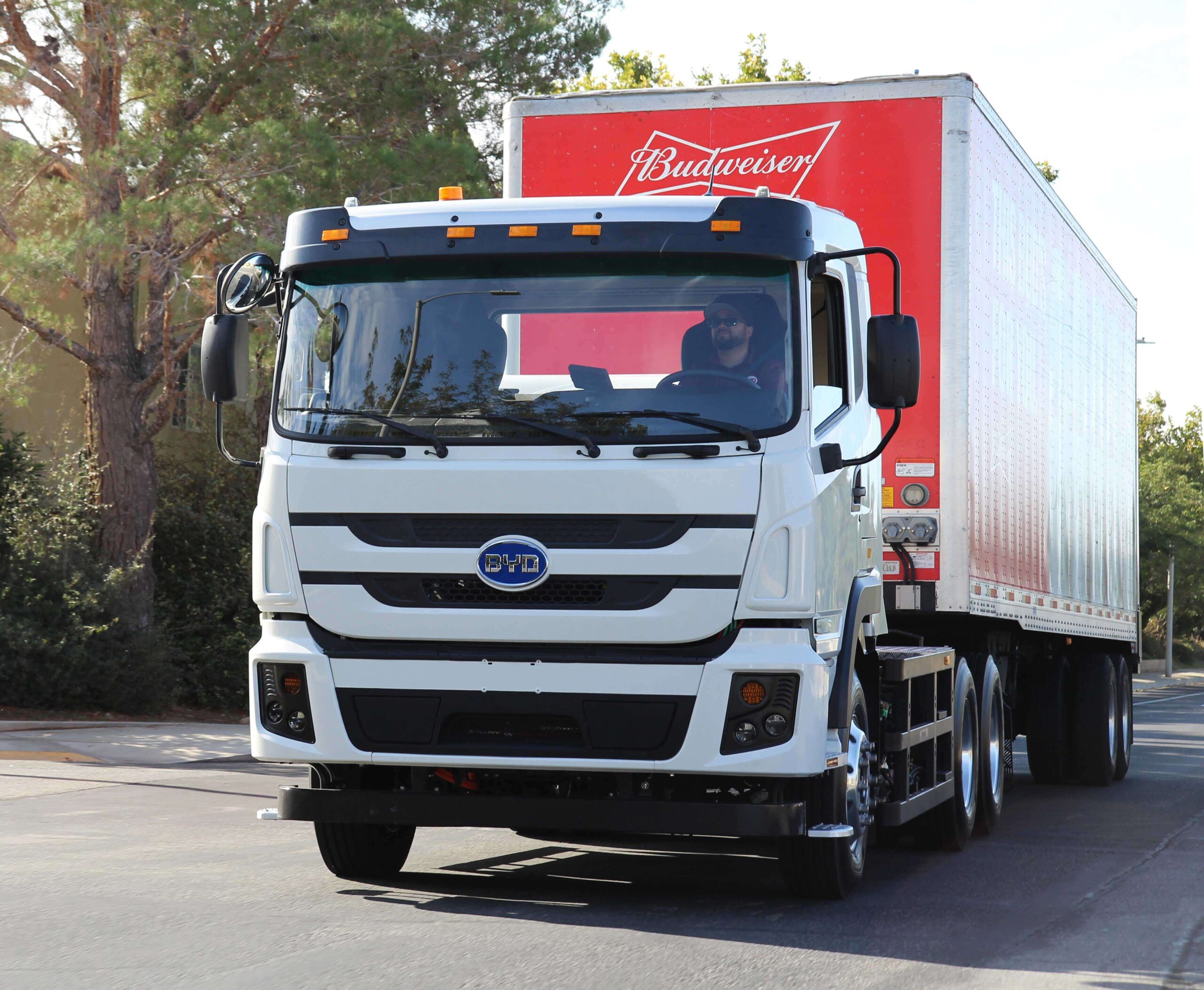 “This is a great milestone for BYD, and it is just the beginning,” said Aaron Gillmore, BYD’s Vice President of Truck Business. “Our trucks are hard at work every day proving that electric is the new standard. 2020 will be a fantastic year for battery-electric trucks.”

The 100th truck will go to work delivering beverages for Anheuser-Busch around the San Francisco Bay area to retail accounts such as grocery and convenience stores on a daily basis. The trucks will charge at the Anheuser-Busch Oakland facility overnight. The project was grant funded by CARB.

Through its 2025 U.S. Sustainability Goals, Anheuser-Busch has committed to reducing carbon emissions by 25% across its entire value chain by 2025.The Oakland deployment builds on the brewer’s existing partnership with BYD including 21 additional BYD battery electric trucks at four of their distribution facilities across southern California: Sylmar, Riverside, Pomona, and Carson.

“We are proud to continue to build on our commitment to sustainable logistics through our partnership with BYD in California,” said Joaquin Schlottmann, Vice President of Tier 2 Logistics at Anheuser-Busch. “By integrating zero-emission vehicles into our distribution fleet, we are taking another step towards reaching our sustainability goals and helping ensure our beers are delivered in the most sustainable way possible.”

Anheuser-Busch put the BYD 8TT through extensive testing on range, acceleration, gradeability, charging speed, and more. The BYD 8TT exceeds the performance requirements of Anheuser-Busch and is receiving very positive feedback from drivers.

ABOUT BYD
BYD is the world’s largest manufacturer of electric vehicles and the global leader in battery-electric trucks. BYD is also an industry leader in several other eMobility markets including cars, buses, forklifts and rail systems such as BYD’s SkyRail. BYD is dedicated to creating a true zero-emission ecosystem by offering technology for solar power generation, energy storage and battery-electric transportation powered by that zero-emission electricity. For more information, please visit www.BYD.com or follow BYD on Linkedin, Twitter, Facebook and YouTube.

About Anheuser-Busch
For more than 165 years, Anheuser-Busch has carried on a legacy of brewing great-tasting, high-quality beers that have satisfied beer drinkers for generations. Today, we own and operate 23 breweries, 14 distributorships and 23 agricultural and packaging facilities, and have more than 18,000 colleagues across the United States. We are home to several of America’s most recognizable beer brands, including Budweiser, Bud Light, Michelob ULTRA and Stella Artois, as well as a number of regional brands that provide beer drinkers with a choice of the best-tasting craft beers in the industry. From responsible drinking programs and emergency drinking water donations to industry-leading sustainability efforts, we are guided by our unwavering commitment to supporting the communities we call home. For more information, visit www.anheuser-busch.com or follow Anheuser-Busch on LinkedIn, Twitter, Facebook and Instagram. 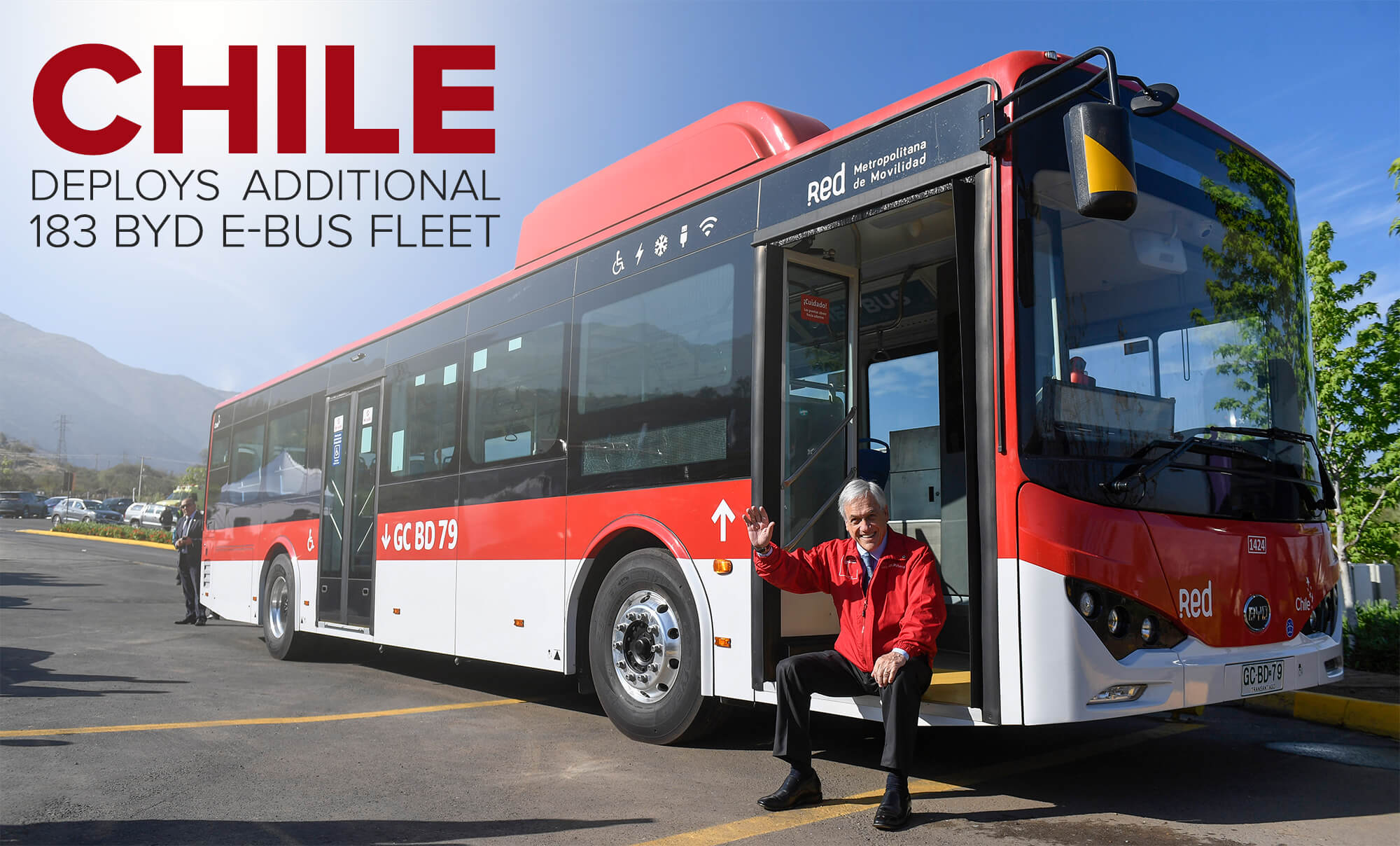 Santiago, CHILE – BYD on October 15 launched Latin America’s first electric bus corridor serviced by electric buses from BYD in the Chilean capital of Santiago, in partnership with local operators Enel X and Metbus, which was attended by Chilean President, Sebastián Piñera; Minister of Transportation and Telecommunications, Gloria Hutt; Minister of Energy, Juan Carlos Jobet; Minister of the Environment, Carolina Schmidt and other officials, plus executives from COP25. This move consolidates Chile as the region’s leader in electric mobility, with a total fleet of 285 operational pure electric buses from BYD.

“We are taking this great leap forward and into the future”, said the President after taking a tour on a BYD electric bus from Ñuñoa to the new electric terminal in Peñalolén. “This new public transportation system will allow us to improve the quality of life of all inhabitants.” Ministers, local officials and other executes accompanied him, including the Country Manager of BYD Chile, Tamara Berríos, and senior representatives from Enel Chile and Metbus.
“The current 285 BYD pure electric buses operating in Santiago are reducing emissions equivalent to more than 9,400 conventional cars”, said Tamara Berríos, Country Manager of BYD Chile. “BYD is proud to contribute its technology towards the first 100% electric bus corridor in Latin America. We hope to continue building our dreams of a cleaner city with our sustainable transport solutions.”
The BYD electric buses are emissions-free and cost-effective, being 70% cheaper compared to conventional diesel buses. The cost per kilometer is about 0.1 US dollars for electric buses, while that of a traditional bus rises to about 0.4 US dollars per kilometer. They come with large-capacity batteries that provide a range of 250 km and take just 5 hours to be fully charged. The buses’ quiet operation makes them friendly for use in highly populated areas. In addition, they come with universal accessibility, greater comfort, greater security, more comfortable and wide seats, low flooring, Wi-Fi, air conditioning and USB chargers.
Serving one of the main routes of the city’s transit system, the new fleet will benefit about 660 thousand people across nine communities: Maipú, Central Station, Santiago, Ñuñoa, Peñalolén, Pudahuel, Cerro Navia, Quinta Normal, and Lo Prado. Since their arrival, users have positively rated the buses, which reached a score of 6.3 (out of 7.0) in a satisfaction survey conducted by the Ministry of Transportation.
The BYD electric buses are recharged at electric terminals located in the Peñalolén and Maipú districts. These can handle all the buses, making charging schedules and distribute power, in order to provide the vehicles with enough range for a full days’ operation. To provide a reliable power source to recharge the buses, high, medium and low voltage paths have been built on-site, plus an energy transformation center.
The project includes the use of 40 bus stops for the new corridor, all the stops will include LED lighting, information screens, USB chargers, bicycle parking, and more – all with the aim of improving users’ travel experience.
As the city prepares for the upcoming UN Climate Change Conference COP25, this first pure electric corridor is a tangible and far-reaching effort to the cause of environmental protection. According to Santiago’s environmental plan, 50% of the city’s fleet will be replaced with pure electric in the near future.
At present, BYD pure electric buses are successfully servicing markets in many countries across Latin America, including Chile, Brazil, Colombia, Ecuador, Argentina, Peru, and Uruguay. Globally, BYD’s pure electric buses and taxis have spread to over 300 cities, in more than 50 countries and regions.

Alexander Dennis Limited (ADL) and BYD Europe jointly announced today that the companies’ electric vehicle partnership, which delivers the leading UK electric bus, has already topped 100 double deck bus sales. ADL is a subsidiary of NFI Group Inc. (NFI), one of the world’s largest independent global bus manufacturers and BYD is a global leader in new energy vehicles, with more than 50,000 pure electric buses and coaches delivered, together with associated battery and other technology.

These impressive figures for BYD ADL’s double deck include significant fleet deals with some of the UK’s major bus operators including Metroline, Stagecoach, National Express and RATP Dev London. The BYD ADL partnership has seen the move to electric mobility within the passenger transport sector gathering pace over the past 12 months as more and more operators realise the operational benefits of combining ADL’s stylish and comfortable bus design with 100% emissions-free, pure-electric operation. Importantly, BYD designs and installs charging infrastructure systems, to provide its customers with a complete one-stop-shop solution to fleet electrification.