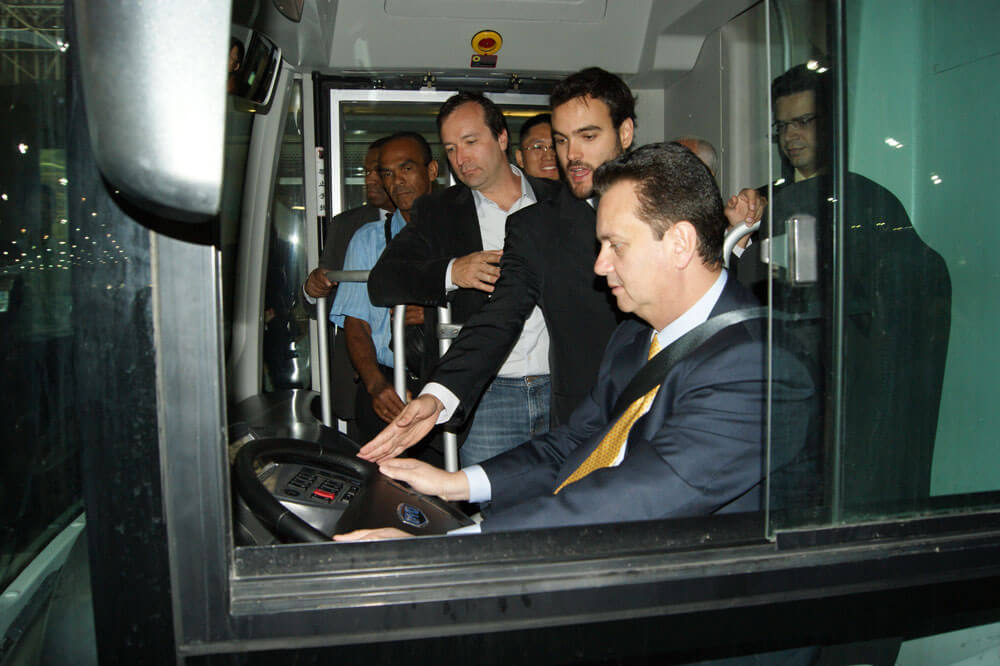 SAO PAULO–(BUSINESS WIRE)–City of Sao Paulo, Brazil’s Mayor Gilberto Kassab drove BYD’s pure battery-powered bus to the “Programa Ecofrota” event at the Anhembi Convention Center in Sao Paulo and announced plans that he wants BYD’s electric buses to run in Sao Paulo by year end. The BYD 12-meter GreenCity bus (internally called the K9) was on display at Sao Paulo’s biggest and most influential convention center along with other presentations on new urban sustainable technologies all planned for the streets of the city during the World Cup. The City Hall organized a closing ceremony of the “Programa Ecofrota” under the direction of the Secretary of Transportation to support the use of different clean technologies in its public bus fleets, including wired-trolley buses, biodiesel buses, sugar-cane diesel buses, ethanol buses and electric buses. None of these technologies are widely accepted yet, but BYD’s purely electric bus, the GreenCity K9 bus, was the only bus at the event. Mayor Gilberto Kassab displayed his skills as a “bus driver” as he drove ~30 participants on the bus for more than 10 minutes around the center. After his drive, the Mayor immediately requested to BYD, “Can we have at least 5 battery buses in Sao Paulo this year?!!”

There are approximately 15,000 public buses in the city of Sao Paulo today, however fleet buses are responsible for more than 20% of total transportation emissions. BYD’s electric bus is not only zero-emissions but also economical. In order to drive 1 kilometer, a 12-m diesel bus consumes ~0.55 L of diesel which costs ~1 Brazilian Real; while it only takes 0.91 – 1.2kwh to propel BYD’s electric bus 1 Km. The cost for 1.2Kwh of electricity in Sao Paulo is about 0.35 Real – this is a dramatic savings! Half-a-million reals worth of energy (equivalent cost) can be saved during the life cycle of a San Paulo bus.

BYD has the largest all-electric fleets in the world and has just finished a testing program in partnership with the IntraAmerica Development Bank and the C40/Clinton Climate Initiative and plans to commercialize and manufacture buses in Brazil in the future. For more information, visit BYD at www.facebook.com/bydcompany and www.byd.com

BYD is ranked #1 at the top of Bloomberg’s and BusinessWeek’s 2009 Tech 100 List (http://www.businesswire.com/news/home/20100520006751/en/BYD-Tops-Bloomberg-Businessweek%E2%80%99s-12th-Annual-Tech ) and is the leading manufacturer of advanced, environmentally-friendly battery technologies like the BYD’sIron Phosphate battery used in BYD electric vehicles and electric buses. BYD’s solar panels and LED Lighting systems have CEC, TUV/CE and UL listings, and the company enjoys rapid growth in consumer electronics space and electrified transportation sector manufacturing under its BYD brand. BYD is the fastest-growing Chinese automotive and green energytechnology enterprise. The Company trades on the Hong Kong Exchange (HKE) under the ticker numbers (HK.0285 – BYD Electronics) and (HK.1211 – BYD Company Ltd.), as well as on the Shenzhen Stock Exchange under the ticker number (002594 – BYD Company Ltd.). For more information, visit www.byd.com , www.facebook.com/bydcompany or emailpr@byd.com.