The continued contribution of the DM-i technology fueled further success for the DM model, which saw 38,771 units sold in October, up 444.1% YoY，positioning BYD as a dominant player in China’s plug-in hybrid vehicles market. Globally, the DM-i model also holds an important position. The Qin Plus DM-i and Song Plus DM-i took the 4th and 8th places, among PHEV market worldwide in August with sales of 13,043 and 8,731 units respectively, according to data from EV SALES/EV VOLUME. 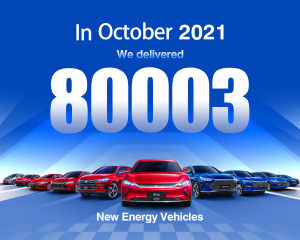 BYD e-platform 3.0 solves battery-related safety problems of the NEV and increases its range at low temperatures. It will alter people’s stereotype of BEVs. EA1, the very first model built upon this platform also enjoyed popularity in the market with 6,018 units sold in October, becoming the biggest contributor to the market for NEVs priced at around RMB 100,000. 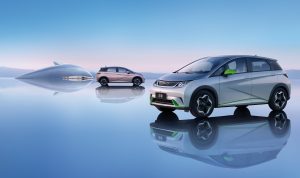 On October 28th, BYD released its financial report for the Q3 2021. According to the report, BYD achieved operating revenue of 54.306 billion RMB in Q3 2021, a YoY increase of 21.98%. Most notably, the company invested over 5.23 billion RMB in R&D during the first three quarters.

The first ten months of the year saw drops in different levels of sales in the auto market, owing to chip shortages across the auto industry. Nevertheless, BYD has continuously attained higher sales records, thanks to its core technologies such as the Blade Battery, the DM-i technology, and e-platform 3.0, becoming the biggest dark horse in the Chinese and even global NEV markets.

BYD (Build Your Dreams) is a multinational high-tech company devoted to leveraging technological innovations for a better life. BYD now has four industries including Auto, Electronics, New Energy, and Rail Transit. Since its foundation in 1995, the company quickly developed solid expertise in rechargeable batteries and became a relentless advocate of sustainable development, successfully expanding its renewable energy solutions globally with operations in over 50 countries and regions. Its creation of a Zero Emissions Energy Solution, comprising affordable solar power generation, reliable energy storage, and cutting-edge electrified transportation, has made it an industry leader in the energy and transportation sectors. BYD is a Warren Buffet-backed company and is listed both on the Hong Kong and Shenzhen Stock Exchanges. More information on the company can be found at http://www.byd.com.