SHENZHEN, CHINA & SYDNEY, AUSTRALIA – On Feb. 19, BYD Yuan Plus (named ATTO 3 in Australia), the first A-class SUV built upon BYD’s e-platform 3.0, was jointly launched in China and Australia and began pre-sales in Australia. Two models of ATTO 3 would enter the Australian market with the official guide prices ranging from 44,990 to 47,990 AUD (approximately $32,350 to $34,500). 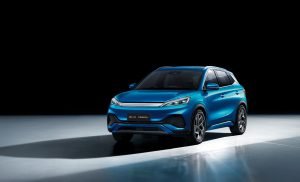 In the Australian market, Yuan Plus is named ATTO 3. ATTO is inspired by the Attosecond, the smallest time scale unit in physics, which means ATTO 3 is speedy, energetic, and dynamic.

The e-platform 3.0 improves EV safety and battery performance as well as optimizes the driving experience. It creates a new generation of smart electric vehicles that are more efficient and safer. Concurrently, ATTO 3 is also specially configured with the BYD auto applications for the Australian market.

BYD’s revolutionary Blade Battery technology comes as a standard in ATTO 3, offering drivers industry-leading safety levels as well as an extended single-charge range capability. Launched by BYD in 2020, Blade Battery is the only battery that successfully passes the nail penetration test, the most rigorous way to test the thermal runaway of batteries. Also, the space utilization of the Blade Battery pack increases by over 50%, compared with that of conventional lithium iron phosphate block batteries, resulting in significant improvements in energy efficiency and range.

He Chong, the Olympic Champion, said, “I am impressed by the trendy appearance, the sporty-themed interior, as well as the power of ATTO 3, all especially designed for sport-lovers like me.”

The special guest, Murray Davis, Trade and Investment Commissioner – Great China, New South Wales Government, considered that carbon emission reduction is the goal of all countries, and to this common objective, BYD’s new energy vehicles and technologies have made significant contributions.

Luke Todd, Director of EVDirect, strongly believed that ATTO 3 would be warmly welcomed by the Australian public.

Henceforth, BYD, with its partners, will provide technological innovations for a better life and create a greener and better future.