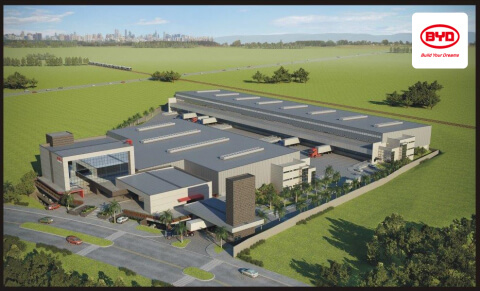 CAMPINAS, Brazil–(BUSINESS WIRE)–The city of Campinas (in the São Paulo region of Brazil) has been selected as the home to the BYD’s newest factory creating ~450 new local jobs. Executives from Campinas City Hall and BYD Company Ltd. this week announced the opening of the company’s first South American manufacturing facility. The factory is slated to open in 2015 and will launch the manufacturing and assembly of the world’s only long range pure electric transit bus in South America as well as the first fire safe and recyclable Iron-Phosphate battery packs. “In the first year of operation (starting in 2015), the plant will have a maximum production capacity of 1,000 electric buses as well as all of their batteries,” said BYD Brazil’s General Manager Tyler Li. “This is the first stage of manufacturing expansion.”

BYD Founder and Chairman, Mr. Wang Chuanfu stated, “BYD chose Campinas because of this city’s spirit of innovation and their goal of building a cleaner society. Along with the buses and batteries, our dream is to build solar panelsand energy storage systems here to help the region achieve their zero emissions goals.” In addition to the 32,000m2 and 20,000m2 manufacturing facilities on campus, BYD also plans to open a Research & Development center for their Photovoltaic, Smart-Grid and LED Lighting businesses in the second phase of site development. The Mayor of Campinas, Jonas Donizette pointed out, “BYD fits very well in our City’s quest to attract investments, it is a company that produces goods and technologies related to the use of renewable energies, and also operates in key segments for the future of cities with sustainable urban mobility plans.” This sentiment was echoed by many, including the President of Invest Saint Paul, Luciano Almeida, “In February of this year, we visited BYD in China and observed cutting edge technology and the quality of their products. The arrival of BYD in the State strengthens the role of St. Paul to always be at the forefront of new technologies.”

BYD Company Ltd. is one of China’s largest companies. It has successfully expanded globally in Europe, North and South America. Specializing in battery technologies, their green mission, to “solve the whole problem”, has made them industry pioneers and leaders in several high-tech sectors including High-efficiency Automobiles, Electrified Public Transportation, Environmentally-Friendly Energy Storage, Affordable Solar Power and Information Technology and Original Design Manufacturing (ODM) services. BYD has made a strong entrance to the North, Central and South American markets with their battery electric buses, and lineup of automobiles. Their mission lies not just in sales growth, but also in sociological integration and local job creation as they have poured incredible investments into developing offices, dealerships and manufacturing facilities in the local communities they now call home, truly a first for Chinese companies. For more information, please visit www.byd.com or www.facebook.com/bydcompany

Invest São Paulo –São Paulo Agency for Investment. Promotion and Competitiveness is the gateway for businesses wishing to invest in the state. The agency provides free of charge strategic information to help investors find the best locations for your business, providing environmental, tax and infrastructure advisory, facilitating the relationship of companies with government institutions and utilities. Invest São Paulo prospect new business, welcome foreign delegations, promote the image of São Paulo in Brazil and abroad as a leading destination for companies in Latin America and propose to the Government of the State policies that contribute to improving the competitiveness of São Paulo. For more information, visit www.investe.sp.gov.br