Bolstered by  the DM-i technology, BYD sold 43,984 units DM models in the month, up 499.8% YoY as a great player in China’s plug-in hybrid vehicles market; also, thanks to advanced technologies like the e-platform 3.0 and the Blade Battery, BYD EV models created a stable sales growth, achieving 46,137 units sales volume with a YoY increase of 153.2 %.

As the flagship NEV sedan of the Dynasty series, BYD Han once again set an all-time high record of 12,841 units, in which Han EV alone sold 10,021 units. With cumulative sales exceeding 140,000 units, BYD Han has become the new paradigm in the market.

The sales of the 2021 Tang series doubled YoY to over 8125 units. BYD Tang DM-i, with its advantages of “fast, economic, quiet, smooth, eco-friendly” and its low fuel consumption (5.3L/100km), has been an important player in the SUV segment. 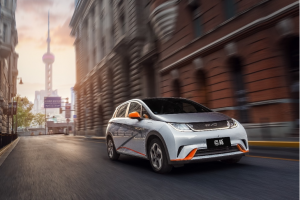 As the first production model built on the e-platform 3.0, the EA1 sold 8809 units in the month. With its great exterior, large space, and low energy consumption, the EA1 has achieved noteworthy performance since it was recently launched, becoming the dark horse in the market.

At the 26th United Nations Climate Change Conference (COP26), BYD’s electric buses were designated as the official shuttle buses for global leaders and the public and served as the exhibition vehicles in the main venue. During the 4th China International Import Expo (CIIE), BYD was the first company in China to be awarded the Certificate of Declaration of Commitment to Carbon Neutrality by SGS. Within the context of efforts to peak carbon dioxide emissions and to achieve carbon neutrality, BYD is leveraging its advantages in the field of NEVs to continually introduce green solutions to accelerate the transition toward green and low-carbon development. BYD believes that together, we can “Cool the Earth by 1℃”.

BYD (Build Your Dreams) is a multinational high-tech company devoted to leveraging technological innovations for a better life. BYD now has four industries including Auto, Electronics, New Energy, and Rail Transit. Since its foundation in 1995, the company quickly developed solid expertise in rechargeable batteries and became a relentless advocate of sustainable development, successfully expanding its renewable energy solutions globally with operations in over 50 countries and regions. Its creation of a Zero Emissions Energy Solution, comprising affordable solar power generation, reliable energy storage, and cutting-edge electrified transportation, has made it an industry leader in the energy and transportation sectors. BYD is a Warren Buffet-backed company and is listed both on the Hong Kong and Shenzhen Stock Exchanges. More information on the company can be found at http://www.byd.com.