BYD UK and Alexander Dennis Limited (ADL) jointly announced today that their electric vehicle partnership, the UK’s leading electric bus producer, has handed over its 500th electric bus. The zero emission double decker has joined the fleet of the partnership’s launch customer, Go-Ahead London, as orders for the next 500 BYD ADL electric buses have already been confirmed for public transport operators across the UK. 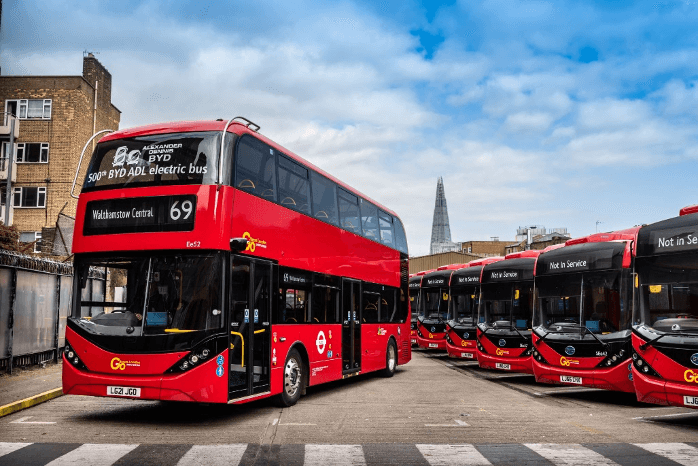 BYD and ADL combine their strengths to offer reliable and cost-effective electric buses for operators in the United Kingdom, Ireland and New Zealand. Having entered a partnership agreement in October 2015, the partnership delivered its first buses the following summer. Its electric buses for the UK and Ireland are built in Britain, ensuring that investment in cleaner transport benefits communities across the country, as well as the environment.

Less than five years after rolling out the first, the partnership has now delivered the 500th BYD ADL electric bus. This BYD ADL Enviro400EV double decker is one of 20 that have joined the Go-Ahead London fleet for Transport for London route 69 between Walthamstow and Canning Town.

Go-Ahead London has worked closely with the BYD ADL partnership since its inception, becoming its launch customer in 2016 and continuing to support product development with its operational experience. The very first BYD ADL electric bus – a BYD ADL Enviro200EV single decker – joined the handover of the 500th as the manufacturers paid tribute to Go-Ahead London’s crucial role in the deployment of electric buses in the UK. This has made Go-Ahead the country’s biggest operator of electric buses, including nearly half of the 500 BYD ADL electric buses delivered so far.

Frank Thorpe, Managing Director of BYD UK, said: “We were delighted in 2015 when Go-Ahead London embarked upon their journey towards electrification with us, and we’re even more thrilled today as we celebrate the handover of the 500th BYD ADL electric bus. It’s a very significant milestone, and not only for the BYD ADL partnership. It demonstrates clearly the commitment of the nation’s capital to decarbonization, with eMobility playing an increasingly fundamental role in delivering a cleaner transport system for millions of people. Operators like Go-Ahead London, with the BYD ADL partnership in support, really are leading the charge.” 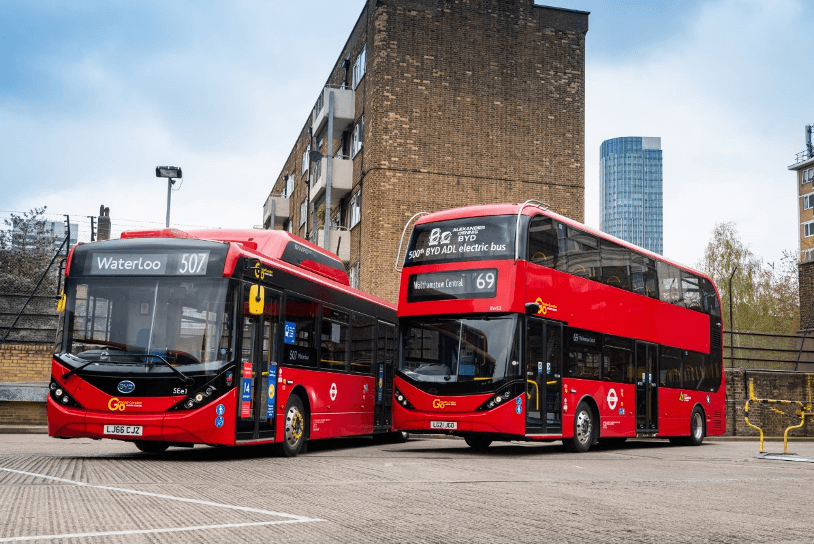 ADL UK Sales Director, Martin Brailey said: “As we prepare to transition chassis assembly to our UK facilities to deliver a product fully built in Britain, the BYD ADL partnership’s winning combination of class-leading technology and design expertise continues to set the standard for electric buses. This has been made possible by our customers, and none more so than Go-Ahead London, who were the first outside China to convert an entire depot to electric operation with the launch order five years ago and who continue to challenge us to deliver ongoing innovation.”

John Trayner, Go-Ahead London’s Managing Director, said: “It is fitting that this significant milestone took place at Waterloo, our global award-winning all-electric bus garage. Waterloo pioneered electric bus technology in 2013 and it quickly proved reliable in the capital’s high frequency and demanding stop/start operating environment. Along with the Mayor, Transport for London and other important infrastructure partners, we are seamlessly transitioning the capital’s iconic red bus fleet to deliver a zero-emission public transport offering.  Congratulations to the BYD ADL partnership on reaching 500 e-bus deliveries.”

Richard Harrington, Go-Ahead London’s Engineering Director, added: “We know that our people enjoy driving and maintaining what was, until relatively recently, a new technology. Go-Ahead London has a proud history of innovation and as our buses switch from diesel to other technologies, our experience as the UK’s largest e-bus operator, with over 200 BYD ADL electric vehicles in service, will prove invaluable.”

As the transition to zero emission transport continues to accelerate, the BYD ADL partnership has already taken firm orders for the next 500 electric buses, expected to be delivered over the next twelve months and taking the partnership’s total to over 1000.

BYD Company Ltd. is one of China’s largest privately-owned enterprises. Since its inception in 1995, the company quickly developed solid expertise in rechargeable batteries and became a relentless advocate of sustainable development, successfully expanding its renewable energy solutions globally with operations in over 50 countries and regions. Its creation of a Zero Emissions Energy Ecosystem – comprising affordable solar power generation, reliable energy storage and cutting-edge electrified transportation – has made it an industry leader in the energy and transportation sectors. BYD is listed on the Hong Kong and Shenzhen Stock Exchanges. More information on the company can be found at www.byd.com.