VANCOUVER, BC, October 9, 2018 –BYD (Build Your Dreams) Canada has been awarded an order for zero emission, battery-electric buses by WESTCOAST Sightseeing, the first tour company in Canada to order clean energy buses, and the first to commit to having a 100% clean-energy fleet by 2023.  Battery and Electric Vehicle Pioneer BYD is the world’s largest manufacturer of electric vehicles and batteries, and the overwhelming global leader in battery-electric buses.

The largest private bus operator in Vancouver, WESTCOAST Sightseeing has agreed to work exclusively with BYD on converting their entire fleet of 90 buses, which will include open top buses, double decks and singles and others.  WESTCOAST Sightseeing will also work with city to develop charging infrastructure that will not only benefit WESTCOAST but many other companies that want to reduce their greenhouse gas emissions and climate impact.

“Our business is built around the natural beauty of our home and we are especially conscious of the impact our day-to-day operations has on the environment,” said Rob Safrata, Chief Executive Officer of WESTCOAST Sightseeing.” We are proudly working towards a greener and more sustainable future. And adding electric buses and boats is the first step to achieve our goal in 2023 of becoming the first Sightseeing firm in Canada with 100% electric vehicles.” WESTCOAST Sightseeing recently added Electric Harbour tours to its line of sightseeing products, providing the first Harbor tour on a 100% electric boat in Vancouver.

The BYD battery-electric buses will make an immediate improvement to air quality and noise levels for the B.C. region. These buses alone will deliver a reduction in carbon emissions of some 4,500 Metric Tons of carbon emissions per year based on EPA standards.

“CEO Rob Safrata has long held a clean energy vision and we are excited to be working with him,” said BYD Canada’s Vice President Ted Dowling. “This aligns perfectly with the recent announcement by British Columbia Premier John Horgan for the need to find other ways to reduce emissions.”

BYD is the world leader in zero emission buses. BYD Canada was the pioneer in Canada and is now the market leader. In addition to this BC order, BYD Canada has buses on order or in operationfor Société de transport de Montréal (STM) and the Réseau de transport de Longueuil (RTL) in Quebec; Toronto Transit Commission (TTC) in Ontario; and St. Albert (STAT) and Grand Prairie in Alberta.  BYD had more electric buses on the Canadian roads than any other firm.

Investing more than $250 million in North America to date, BYD has delivered more than 270 buses in North America; and sold or leased in excess of 600 buses in total to more than 50 municipal, transit agency, university, airport, federal and other commercial and private sector clients in 14 U.S. states, and across 4 provinces in Canada.

Introducing the world to Vancouver, Victoria, and Whistler for more than 30 years, WESTCOAST Sightseeing started in 1984 as a family business delivering guided tours onboard minibuses. Today, the firm is Vancouver’s only sightseeing company to offer Hop-On, Hop-Off, Guided Tours, Charters, Electric Harbour Tours, and a seasonal shuttle to Whistler. WESTCOAST Sightseeing has created remarkable experiences for more than 250,000 guests from all over the world.

The Official Sponsor of Mother Nature™,BYD is the world’s largest manufacturer of electric vehicles and batteries, and the overwhelming global leader in battery-electric buses with more than 35,000 zero-emission buses in service across in service across 200 cities, 50 countries and six continents.  BYD is also an industry leader in several other high-tech sectors, including high-efficiency automobiles, medium- and heavy-duty trucks, electric forklifts, SkyRail (monorail), energy storage and solar power generation. Pioneering zero-emission technology, the international firm is helping to revolutionize transportation and leave a cleaner environment. BYD’s stock is publicly traded and Berkshire Hathaway based in Nebraska is the largest public shareholder. For more information, please visitwww.BYD.com 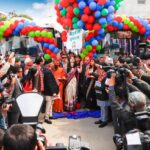