LOS ANGELES, CA – March 14, 2018 – BYD (Build Your Dreams), the largest battery-electric bus manufacturer in North America and the largest electric vehicle company in the world, today announced a new order that will see three American-made BYD K9S electric buses deployed in Baton Rouge, LA under the authority of the Capital Area Transit System (CATS) later this year. The purchase of these new buses reflects BYD’s continued dominance of the North American battery-electric bus market as well as the continuing growth of the sector across the continent.

“In every corner of the continent, we are witnessing rapid growth in the electrification of bus fleets,” stated Macy Neshati, BYD Senior Vice President. “Whether you are looking at the hot and humid climates of the Deep South, the wet weather of the Northwest or the frigid climates of the North, BYD buses are workhorses that can handle any condition.”

With a range of approximately 150 miles on a single charge and a capacity of up to 32 passengers, depending on configuration, the K9S is ideally suited for the needs of Baton Rouge. BYD buses are projected to cost roughly $1.00 less per mile to operate than the typical diesel-powered bus. The new buses produce zero emissions and make oil changes a thing of the past. The proprietary BYD Iron-Phosphate battery is nontoxic, 100% recyclable, fire-safe and incredibly long-cycled. In fact, BYD is the first and only electric bus manufacturer to offer a full 12-year warranty on batteries.

We are excited to incorporate electric buses into our planned Bus Rapid Transit projects in Baton Rouge,” said Bill Deville, CATS CEO. “These buses will allow us to see how we can use electric buses to reduce the impact of our fleet on our environment and also control costs.”

According to their Website, CATS provides bus service to residents of and visitors to Baton Rouge, Louisiana. They operate 29 bus lines and provides more than 2 million rides each year. To CATS leaders, the new buses constitute an important opportunity to innovate. “Electric buses are a big step forward for CATS. They represent a chance to pilot new technology in Baton Rouge, and we are very excited about that,” said Jim Brandt, President of the CATS Board of Commissioners.

“Our mission at BYD is simple. We want to change the world and we are proud of our clients that are joining us in that effort. We are eager to see these buses rolling down the streets of Baton Rouge later this year.” concluded Macy.

The Official Sponsor of Mother Nature™, BYD is the world’s largest manufacturer of electric vehicles and the overwhelming global leader in battery-electric buses with nearly 40,000 buses in service across North America, South America, Asia and Europe. BYD is also an industry leader in several other high-tech sectors, including high-efficiency automobiles, medium- and heavy-duty trucks, electric forklifts, SkyRail, energy storage and solar power generation. BYD is also one of the world’s largest manufacturers of rechargeable batteries. BYD is a publicly traded company with 60% of its stocks owned by U.S. investors. Warren Buffett’s Berkshire Hathaway is the largest single shareholder at 9.9%. 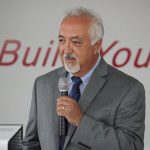