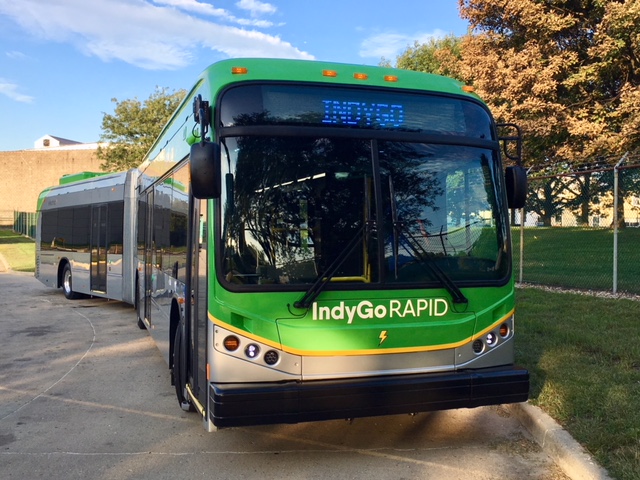 Indianapolis, Ind. – (9/13/18) – IndyGo, the largest public transportation provider in the state of Indiana, and BYD (Build Your Dreams) announced the delivery of the first K11 60-foot battery-electric bus to serve Indianapolis.  The bus is the first of 13 ordered for the Red Line by IndyGo.

“BYD has delivered the first bus on time and this allows us to begin working with operations and emergency services on training, and testing battery range.” said Justin Stuehrenberg, Vice President of Planning and Capital Projects. “IndyGo is committed to our transition to an all-electric fleet over the next 15 years.”

This K11 will serve IndyGo’s Red Line, a 13.1-mile route that runs between Broad Ripple on the north side of the city and the University of Indianapolis on the south side, offering more frequent service and longer hours than current routes. The Red Line is the densest corridor in terms of population and employment within Marion County,

The bus purchases are part of IndyGo’s plans to replace all its diesel buses with electric models by 2032; reducing pollution and operating costs, while improving service for Indianapolis residents and visitors.

“We are very proud to be part of IndyGo’s transformation to an all-electric transit fleet,” said Bobby Hill, Vice President of BYD North America, Coach and Bus. “The K11 bus is an innovative, green technology solution for the transit needs of Indianapolis and Marion County.”

By using electric buses, IndyGo will reduce noise and its use of diesel fuel and the emissions that come from it.  At least some of the energy required to charge the buses will be derived from a 1 megawatt solar system mounted atop IndyGo’s garage.

BYD was the first firm in the world to design and manufacture a 60-foot battery-electric bus.  The K11 is an affordable, dependable, and American-manufactured bus that can integrate easily into a transit fleet, offering a clean, zero-emission alternative to diesel-fueled buses.  The K11 is powered by revolutionary iron-phosphate batteries that are non-toxic and environmentally friendly. The safest in the industry, the batteries come with a 12-year warranty, and BYD was the first to offer such a plan.

Powerful in-wheel motors provide instant torque for great performance in all driving conditions. Regenerative breaking reduces wear while capturing energy to charge the battery. This bus can be charged in 3.5 hours and can also be used as a mobile power supply.

BYD North America also recently announced its joint venture with Generate Capital, Inc., a leading financier, owner, and operator of distributed infrastructure, to launch the first electric bus leasing program of its kind in the United States.  With its North American headquarters in Los Angeles, the firm is also the first electric bus manufacturer with a unionized workforce at its cutting-edge facility of more than 800 employees in Lancaster, California.

The Official Sponsor of Mother Nature™, BYD is the world’s largest manufacturer of electric vehicles and batteries, and the global leader in battery-electric buses with more than 35,000 buses in service across 200 cities, 50 countries and six continents.  The firm has delivered 270 buses in North America; and sold in excess of 650 buses in total to more than 50 municipal, transit agency, university, airport, federal and other commercial and private sector clients in 14 states, and across 4 provinces in Canada.  BYD is also an industry leader in several other high-tech sectors, including high-efficiency automobiles, medium- and heavy-duty trucks, electric forklifts, SkyRail (monorail), energy storage and solar power generation. Pioneering zero-emission technology, the international firm is helping to revolutionize transportation and leave a cleaner environment. BYD’s stock is publicly traded and Berkshire Hathaway based in Nebraska is the largest public shareholder.  For more information, please visit www.BYD.com 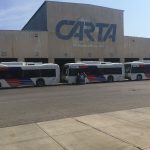 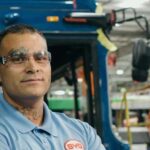