Congressional leaders have apparently reached a decision to support an amendment to the National Defense Authorization Act, crafted by special interests and competitors to shrink the U.S. electric bus market by targeting BYD, one of only three major manufacturers of electric buses in the United States.

The new provision would not take effect for two years. During that time BYD will continue to grow its business. The bill won’t affect private BYD customers not using federal transit dollars for their purchases.

BYD’s electric vehicles are increasingly popular with municipalities, airports and other customers across the United States, and we will work to redouble our sales and continue deliveries of high-quality vehicles to our customers.

This unfortunate decision rewards a special interest misinformation campaign to squash competition in the electric bus sector and could weaken American competitiveness, threaten hundreds of union jobs, and undercut our country’s fight against climate change.

The decision ignores appeals from prominent environmental groups who argued that denying cities access to an important supplier of electric buses would set back the nation’s efforts to address the climate crisis by bringing about higher prices, less innovation and fewer electric buses on the road.

It also rejects urgent appeals from several members of Congress including Rep. Judy Chu; the Los Angeles County Board of Supervisors, and numerous labor unions, business groups and elected officials—and ignores editorials from the Los Angeles Times and Boston Globe.

Nine years after launching the heavy-duty electrical vehicle market in the United States, BYD has created 1,000 American jobs, 750 of them well-paying union positions. Today’s decision is a slap in the face to union workers across the electric vehicle sector.

The centrality of BYD electric buses and trucks to our country’s clean-fuel future was underscored by the Los Angeles Department of Transportation’s decision last month to purchase 130 all-electric buses from BYD—the largest order of electric buses in U.S. history.

The United States needs to build its electric bus capacity, not shrink it. We will not stop working to convince Congress to support American competitiveness, union jobs and the fight against climate change. 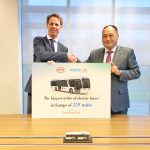 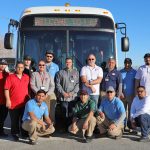