BYD SkyRail São Paulo and São Paulo Metro formally signed a contract on April 27th for BYD to provide its SkyRail for the Line 17 (Gold Line) project. This marks BYD’s second major collaborative project in Brazil following the company’s SkyRail line in the city of Salvador.

Designed to solve urban traffic congestion, BYD’s SkyRail is a straddle-type monorail system with an investment of 5 billion RMB, developed by a dedicated R&D team of more than 1,000 following five years of research and development. The SkyRail brings lower costs, a shorter construction period and greater terrain adaptability when compared to competing technologies, while also being energy efficient, emitting zero emissions and operating quietly.

The first phase of the Line 17 project will extend from São Paulo’s Congonhas Airport to other central parts of the city, connecting vital business districts, the University of São Paulo, and densely populated areas in the city’s east. With a total length of 17.7 kilometers upon completion, the Gold Line will connect with Line 1 (Blue), Line 4 (Yellow), Line 5 (Lilac), and Line 9 (Emerald).

According to Tyler Li, Country Manager of BYD Brazil, Line 17 is designed to reach a daily flow of 250,000 passengers, and the interval between departures can be as rapid as 80 seconds. As such, these parameters necessitate high requirements for the project’s technology and operations system.

As the largest city in South America, São Paulo is both Brazil’s vibrant economic center and a critical logistics hub. Congonhas Airport, as one of the three major commercial airports in the city, became the second busiest airport in Brazil with nearly 187,000 flights and 13.67 million passengers in 2008. Due to its location in central São Paulo, the high volume of passengers and the density of vehicles in the area often contribute to severe road congestion. The completion of Line 17 is expected to significantly alleviate the pressure on road traffic between Congonhas Airport and other sections of the city. On January 3, 2020, BYD was granted a construction permission for Salvador’s SkyRail project

BYD’s ability to win the bid was driven by its expertise in providing an integrated solution, including the vehicles, tracks, stations and automatic control of communication signal systems; and ability to provide tailor-made solutions based on different terrains and localities. It was also underscored by BYD possessing its own intellectual property for these solutions, allowing the company to provide an effective and specialized rail transit system. With Brazil as a starting point, BYD looks to further service South America and make a strong impact on the construction of urban rail transit worldwide. BYD’s Latin American market is rapidly expanding, and other BYD solutions such as its pure electric buses, taxis and trucks are successfully servicing markets in many countries across the region, including Chile, Brazil, Colombia, Argentina, Peru and Uruguay. Globally, BYD’s electric vehicles have spread to over 300 cities in more than 50 countries and regions.

BYD’s headquarters for its North and South American operations is in downtown Los Angeles, California, where the firm’s American SkyRail™ Team is based.

“Over my 45-year career in the planning, design, and construction of rapid transit systems here and abroad, I have never seen a company that matches the depth and breadth of advanced transit technology of BYD – and certainly none with the financial and R&D resources needed to maintain its leadership position over decades to come,” BYD’s Senior Strategic Advisor for SkyRail projects in North America, Dr. Thomas Stone, said. “This SkyRail™ system in Sao Paulo includes vehicles and systems similar to what the company is proposing here in Los Angeles and for several other cities in the United States.  I believe this helps solidify BYD’s position as the new global leader in advanced, urban monorail technology.” 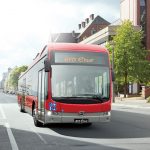